Heather Cameron, Missing from California since 2012.

This is Heather Leann Cameron: 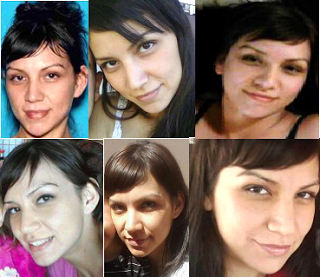 Heather was 28 years old when she vanished from Redding, California, on August 18th, 2012. She was living apart from her estranged husband of 8 years, Shaun Cameron, and their three daughters. At 2:50 on that day Heather dialed 911 from the vicinity of Keswick Dam Off-Highway Vehicle Park and told the operator she had been drugged with heroin and needed assistance. A male voice could be heard in the background of the call. A search of the area took place during which no signs of Heather could be found.

Heather drives as gray four-door 2003 Chevrolet Silverado Pickup Truck with the California license plate 8Z75740. She is considered missing under suspicious circumstances. She has a history of drug abuse. Shaun Cameron stated that his wife had made "some bad decisions in the last year" but that she was a great mother and always checked in on her daughters.

Two men went missing under similar circumstances in the same area as Heather. Authorities are investigating of the 3 disappearances are connected.

If you have any information regarding the disappearance or whereabouts of heather Cameron, you are encouraged to contact the Shasta County Sheriff's Office at 530-245-6025.

DOB: 08/11/1984
Description: Heather has brown hair and eyes. She may go by her maiden name which is Haller. Some agencies list her as Heather Cameron-Haller. She has a tribal tattoo of a flower on her back and a tattoo of a girl on her left calf. She was 5'6 and 115 pounds when she disappeared.