The Murder of Candace Rough Surface, Unsolved for 16 years.

This is Candace "Candy" Rough Surface: 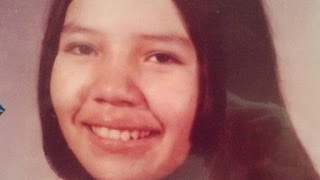 18-year-old Candace's remains were discovered in May of 1980. She had been missing for 9 months. Her body was badly decomposed and was found in a bed of mud and twigs. Police claimed they could find no eye-witnesses or evidence leading to an arrest in Candace's murder, and the case remained unsolved for  almost 16 years.

In the fall of 1995, a man named James E. Stroh came forward to police regarding a rape and murder he said  he and his cousin, Nicholas Scherr, were involved in when they were 15 and 16 respectively. Stroh's bitter divorce in Wisconsin had already lead his ex-mother-in-law to meet with authorities about his involvement as he had shared his secret with several family members including his ex-wife. Stroh later took a plea deal as he admitted his involvement in Candace's rape and murder but said he only participated out of "fear." He reported that he and Scherr met Candace at a now defunct bar called the Joker's Wild which was known for selling alcohol to underage patrons. They took Candace to a party where Stroh said someone "tried something" with her which ended up angering her and prematurely ending the party. Candace allegedly threatened both boys physically and verbally, reminding them that she knew their identities. After Candace hit one of them, Stroh reported that Scherr lost control of himself. Scherr ordered Stroh out of the car saying they were going to "do" her. Scherr pulled her out, knocked Candace to the ground, and raped her and then ordered that Stroh do the same. Following the rapes, Scherr retrieved  a gun from his truck. Scherr shot Candace three or four times and handed the gun to Stroh who reportedly shot her once. They split the money they found in her purse, chained her body to the back of the truck, and drug her almost a mile to the Missouri river. It was there that they dumped her.

Nicholas Scherr came from a well-to-do family from a small, mostly white town of Mobridge in South Dakota that was a hub for hunting and fishing. His older twin brothers competed in wrestling in the Olympics and returned with bronze medals. A local sports arena was renamed after them.

On May 7th, 1996, Scherr plead guilty to a reduced charge of 1st degree manslaughter in the rape and murder of Candace Rough Surface. This charge was plead down from the original murder charge which would have carried with it a mandatory life sentence. He was sentenced to 100 years in prison, but would be up for parole in about 13 years. James Stroh was later released in 2004. As of 2015 Scherr was still in prison, though it is unclear if his status has changed.

Candace was the youngest of 8 children. She had dropped out of high school during her sophomore year after giving birth to a son fathered by another youth from Standing Rock Lakota. She lived in a small home on the reservation with her family and has been described as "quiet" and "pretty." Candace's community believes that the police response could have been more swift and aggressive. They believe that had Candace been a young white girl, her case would have garnered more attention. Her case is sighted as one of the many reasons for continued racial tension in the community.

May she rest in peace.

Update 05/03/19: Nicholas Scherr has been granted parole after serving 23 years for Candace's rape and murder. He will be released from prison in the coming days.

Tribal Information: Candace is a member of the Standing Rock Lakota.